On this occasion, Carlton wanted to see if I would be interested in photographing “the valley which contained the Cradle of Forestry” from the top of the Fryingpan Mountain Lookout Tower near the Pink Beds on the Blue Ridge Parkway.  Access would be provided by the U.S Forest Service.  I would be given a key so I could go up at times of my choosing after an orientation visit. The finished photograph (7 foot wide Triptych!) would be installed in the Visitor’s Center which received 50,000 visitors a year.

Needless to say, I was interested. Oh, sure, having my photography hanging in the Cradle of Forestry as the focal point for all to see would be nice. But to me the thrill was in the chase, or in this case, in the tower!

A meeting time for orientation was scheduled and I met up with Carlton, Jeff Owenby (Director, Cradle of Forestry Historic Site) and Cindy Carpenter (Education/Interpretation Program Manager) at the Cradle and we rode up to the tower in a USFS truck.

Access from the Blue Ridge Parkway is through a locked gate and several hundred feet of really rough road, more like a jeep path. Slow going and careful driving by Jeff got us up to the tower’s foundation.  Up six flights of stairs and you come to the access hatch in the roof above you, through which you go up to the top. The lock to the access hatch is tucked away in a tight spot, but once this was opened, we were up through the hatch of the 70′ tall tower and out on the platform.

Wow. What a view! I got busy with my camera.

While the others were talking about the scenery, I made the series of captures shown below, with the intent of assembling them into one image when I returned to my office. I shared the finished image with them the next day, and they liked what they saw.

Time to get down to business.

8 handheld captures at 38mm to be (hopefully!) assembled into a seamless image

“The best laid plans of mice and men…”.

A few days later, I made plans to go up and do some shooting and work out a few details. However, poor visibility and a mistakenly swapped padlock for the access hatch thwarted plans for any photography from the tower that day. I did gain confidence that my car would make it up that cow path of a road OK, so that was a good thing. I knew it would, but I tend to be a worrier sometimes.

A picture speaks a thousand words, so I’ll let the images talk for a while:

Tomorrow was another day, and as Carlton would say: “Onward”. 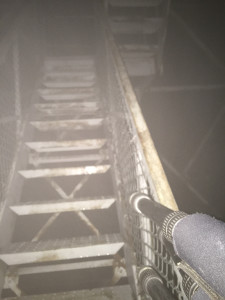 Foggy conditions up on the mountain greet the first attempt at morning photography from the tower. 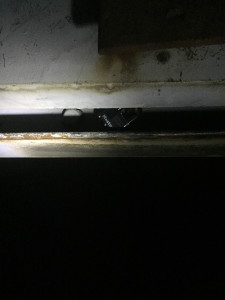 The hard to reach padlock. Hey, my key doesn’t fit! Someone had inadvertently swapped the lock. Oops. 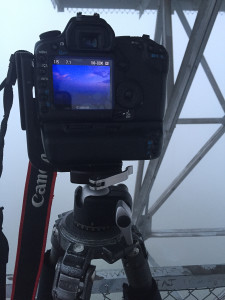 Trying to make the best of a bad situation. Yes, iffy weather conditions and being locked out…might as well go get breakfast! 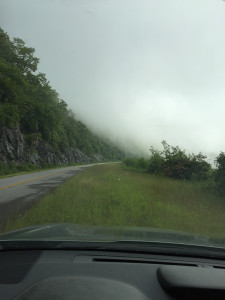 Sitting by the side of the Parkway, emailing the USFS a report

Continuing poor weather conditions up on the mountain, my art show schedule and other factors prevented another attempt up on the tower for several weeks. I was thrilled then one day to find a decent weather forecast AND a hole in my calendar. Showtime…again! Low gear, all the way up… Up to the tower at last…!

Pano 2 was created that day, and once I got it assembled, I was pleased with how it turned out.

The days passed, and I was able to get more captures. My goal was to give the Cradle a wide choice of photographs to choose from. I was pleased with how things were proceeding.

Also taking time out for other things. Unique perspectives with some really good landscape subjects…Looking Glass Rock – note the two electrical transmission towers, far right of frame. I don’t know about you, but seeing this perspective makes me realized how small we really are! Looking Glass Rock from my morning perch on the tower…

Cold Mountain at Dawn…Before you ask, I used a 2-stop graduated blue to clear filter in front of my lens to help the blah sky out… Sunrise from the Tower

Meeting with the Cradle

I came up with 6 total panoramic images that I was happy with. I had a few favorites, but the USFS personnel would be the ones selecting the “winner”.

I printed out all six nice and large, packaged and labeled everything, and called to request a meeting.

Jeff and Carlton narrowed it down to two prospects (Pano 2  and Pano 3), and asked for time to confer with staff. Expand all | Collapse all